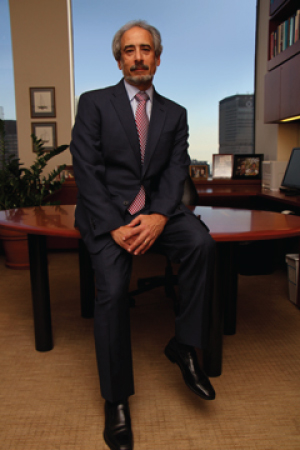 Mark B. Nadler, Principal and co-founder of Nadler Advisory Services, brings a unique set of skills and experiences – both as a seasoned consultant, and as a journalist working at the top levels of newsroom management – to his work as an advisor to CEOs and boards. He specializes in board effectiveness, executive leadership, CEO succession, senior team effectiveness and CEO evaluation. Mark has consulted to the leaders of more than 50 companies across a broad range of industries, ranging from Fortune 500 corporations to family-owned firms and private equity, hedge fund and venture capital portfolio companies.

Mark co-founded Nadler Advisory Services with his brother, the late David Nadler, in 2014, following several years as a Partner in the Leadership Consulting Practice of Heidrick & Struggles International, specializing in board effectiveness and CEO succession. For 16 years, Mark worked in senior roles at Delta Consulting Group (later known as Mercer Delta and Oliver Wyman Delta) where he created the firm’s global Strategic Communication practice, was involved in developing both the Corporate Governance and CEO Succession services, and partnered with David Nadler, the firm’s founder and chairman, to create and publish much of the firm’s landmark intellectual capital.

Mark has written or contributed to more than 70 publications – articles, book chapters, and white papers – on topics related to leadership, governance, and organizational effectiveness, including three books with David Nadler – most recently, Building Better Boards: A Blueprint for Excellence in Governance (2006.) While at Heidrick, Mark authored the white paper, “Move Faster, Drive Harder,” based on research he led which gathered advice for new CEOs based on interviews with nearly 60 experienced chief executives. His chapter, “CEO Succession: An Owners’ Guide for Directors,” in The Handbook of Board Governance (2016) has been updated for the book’s second version, to be published in 2020. He also contributed, “Consulting to CEOs and Boards” in Management Consulting Today and Tomorrow: Perspectives and Advice from Leading Experts (2017).

Prior to consulting, Mark worked as a journalist and news executive. He was a senior editor at The Wall Street Journal and ended his newspaper career as Vice President/Executive Editor of The Chicago Sun-Times. He served twice as a juror for the Pulitzer Prizes in journalism.

Mark holds a BA in English from The George Washington University. He served as an adjunct professor at the University of Minnesota’s School of Communication, teaching upper-level courses in the management of communications organizations. He has been a member of the Academy of Management, the National Association of Corporate Directors, Human Resources People and Strategy, the American Society of Newspaper Editors and the Associated Press Managing Editors. He and his wife live outside Chicago.